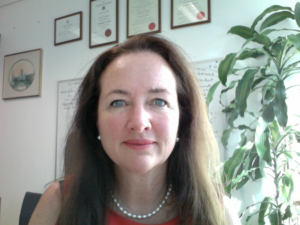 Dr Gilligan completed her undergraduate degrees at Monash University in 1989. Her clinical training in Neurology was completed through the Royal Melbourne and Austin Hospitals and she became a specialist neurologist in 1998. With the support of a NH&MRC postgraduate scholarship, she completed a PhD in 2005, based at the National Stroke Research Institute (which is now part of the Florey Institute of Neurosciences and Mental Health) and the University of Melbourne. She was appointed as a specialist neurologist at Eastern Health in 2000, providing inpatient and outpatient services. She was appointed Deputy Director to the Department of Neurosciences at Eastern Health in 2007 and was appointed to the ongoing Acting Director position in 2012. She has continued with her clinical appointment at Austin Health from 2000.

While on sabbatical leave in 2011, she participated in acute stroke medicine and stroke telemedicine programs at Bichat Claude Bernard University, Paris, France, in collaboration with Professor Pierre Amarenco.  During her sabbatical, she also had the opportunity to visit specialised stroke services in Germany and the UK. She has been an active participant in ongoing stroke research, including the Victorian Stroke Telemedicine project. She has presented internationally & nationally at conferences on her research in the area of acute stroke and continues her teaching and mentoring role with medial students, junior medical staff, specialist and advanced trainees as well as PhD and B Med science students. She has ongoing affiliations with Monash University and the University of Melbourne and The Florey Institute. Along with her Fellowship of the Royal Australian College of Physicians, she is also a member of the Australian and New Zealand Association of Neurologists, Stroke Society of Australia and New Zealand, American Academy of Neurology, Stroke Council of the American Heart Association, and chairperson of the Victoria Brain Foundation.