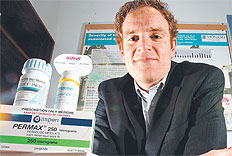 SUE Rance watched her husband Phil become more difficult, argumentative and unpredictable after being diagnosed with Parkinson’s disease in 1997 and put on the drug pergolide, also sold under the brand name Permax.

In 2001 he bought a new campervan. “I think in his mind he wanted to go off and leave Parkinson’s behind, and go off into the sunset,” recalls Sue, who was caring for Phil at their Sydney home since he had been forced to give up work, at the age of 46, about three years earlier.

“He was totally unhappy with his whole situation.”

The problems seemed manageable, until she caught him late at night talking to their neighbour over the garden fence, asking the neighbour to marry him and travel around Australia in the campervan. “She said to me ‘Sue, he’s very ill’. The next day I wrote to his psychiatrist saying I was just about going off my brain. That incident was the thing that crystallised it for me.”

Rance was diagnosed with bipolar disorder and had several in-patient stays at a private psychiatric hospital. But his bizarre behaviour continued. He talked of suicide, and became quite religious. He churned out huge amounts of poetry, and at one point took Sue to a solicitor to discuss divorce. Tellingly, he had also acquired a collection of X-rated videos, and started a clandestine gambling habit.

Before his illness, Rance would never buy a lottery ticket, let alone play the pokies, but now he was sneaking out of the house to hit the one-armed bandits at the local RSL. The sums involved were not large, but to both of them the change was dramatic and troubling.

“Permax completely changed his character,” his wife says. Since being taken off Permax, Sue says her husband is “a million per cent better”, no longer bi-polar and back to normal.

The class of drugs to which Permax belongs — called dopamine agonists, because they mimic the effect of the neurotransmitter dopamine by stimulating the same brain receptors — have in recent years become notorious for causing problem gambling, “hypersexuality” and other behavioural issues in 10 to 15 per cent of patients. One Melbourne law firm has already started work on a class action on behalf of patients who claim to have experienced these symptoms.

David Williams, director of the movement disorders program at Melbourne’s Alfred Hospital, says in some cases these side-effects are so pronounced that patients fritter away a significant chunk of their savings, or wreck their marriage by uncharacteristic sexual behaviour, such as visiting prostitutes.

Other drugs in the class include cabergoline, sold under the brand name Cabaser. Earlier this week another dopamine agonist, called pramipexole (Sifrol) became available in Australia on the Pharmaceutical Benefits Scheme. Although Sifrol has been used for many years overseas, where it is known by other brand names such as Mirapex, it has previously had to be imported privately into Australia. Its maker, Boehringer Ingelheim, considered the cost meant too few patients would be able to afford it, making local distribution unviable.

Victor Fung, a neurologist at Sydney’s Westmead Hospital and a member of the scientific advisory boards of both Parkinson’s Australia and Boehringer Ingelheim, said the cost of importing Sifrol previously was between $10,000 and $15,000 per year.

Pharmacists are currently charging just under $2000 for one year’s supply of Sifrol on private prescription, compared to about $1400 for Cabaser — although for the majority of patients covered by the PBS, the cost for either is now $375 for one year’s supply, or just $60 for concession card holders.

Parkinson’s expert professor Dominic Rowe, chairman of neurology at the Australian School of Advanced Medicine at Macquarie University, says when the side-effects are severe, they can be devastating.

“For some patients, it’s a source of humour — they have heard about the gambling and the hypersexuality, and they say they are looking forward to those side-effects,” Rowe says. “But when they arise, they can really destroy a patient psychologically.”

Williams agrees they can be severe, but argues this needs to be considered in context.

“I have a patient in Australia who took cabergoline and didn’t realise that it was causing problems,” Williams says. “She increasingly went to play the pokies, and after a while was doing that every night. She lost a substantial amount of money — we’re talking $100,000.

“But there’s a continuity or a gradient of symptoms, and people with severe symptoms are in the minority,” he says. “Some people might go to the pokies once a month — it’s not like they all are losing their life savings.

“It’s the same with hypersexuality — there can be stress and marriage breakdown, but there are also, dare I say it, potential benefits of a slight increase in (sexual) interest.”

Williams has been prescribing Sifrol since 2003 in the UK, where it is known as Mirapex, and says in his experience the side-effects affect less than the 10-15 per cent of patients cited in Australia.

In his view the risk of these creating a problem can be minimised, firstly by doctors asking various questions before prescribing any dopamine agonist. He asks patients if they already like to gamble, as the evidence is that the drugs can exacerbate these habits if they are already present. “If people are already going to the casino I would be very reluctant to start them on these medications because they already have the personality that puts them at risk,” Williams says.

Those whom he does start on dopamine agonists are questioned again six months into their treatment. If they have shown signs of the problems, the drugs are stopped — which invariably means the behavioural problems stop also.

The advantage that Sifrol has over both Cabaser and Permax is that the latter are derived from ergot, a type of fungus found in wheat and other grains. Since 2004 these ergot-derived drugs have been linked to an increased risk of heart valve damage.

Although the ergot drugs are cheaper than Sifrol, the emergence of this risk has tilted the cost-effectiveness test in Sifrol’s favour, leading to it becoming available on the PBS.

Both Williams and Rowe welcome Sifrol’s wider availability. Williams says 95 per cent of patients will improvements in their tremor and mood after being prescribed a dopamine agonist, and as the disease can last for 25 or 30 years it’s important to have treatment options.

Rowe says he’s “disappointed that it’s taken so many years for this drug to be available for the multitude of patients with Parkinson’s who should have had it”.